I know...long time no hear. I can't tell you how many times I've sat down at the keyboard fully intending to update this blog. However, the phone always rings or an e-mail comes in that needs to be answered right away...you know what I'm talking about. However, I'm going to certainly try to get back into the habit of updating this once a month at the very least, perhaps even more frequently if I can get the mobile blogging application on my iPhone to behave itself.

So, where do we start? I guess a quick highlight recap of the months since my last post would be in order. In late January, Sandy and I had the opportunity to perform for our first rock star. Jamey Jasta, lead singer of the metalcore band Hatebreed, hired us to entertain at his daughter's birthday party. 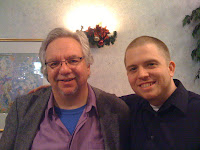 We had a great time with his family and friends. What's more, Jamey was extremely generous, giving us a large assortment of Hatebreed merchandise for my stepson (a hoodie, CDs, DVDs, posters, etc. - all autographed!), who was very impressed when he found out we were going to be hanging out with one of his heroes. 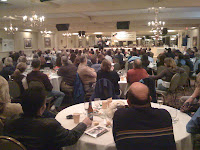 Most of my stand-up work is for private clients, but in March, I was on a comedy club bill that was part of a fundraising event for a conservation

group. It was a large and enthusiastic audience (overly enthusiastic if you count the one drunk biker chick...) Also in March, my newest book for magicians was published, this one on the subject of restaurant magic. 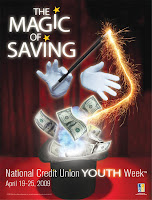 In April, I had the honor of making special appearances at all of the branches of the Sikorsky Financial Credit Union as part of a special promotion for National Credit Union Youth Week. Themed "The Magic of Saving," the promotion was used to encourage the children of credit union customers to open savings accounts and begin to learn how to manage their money. Customers were encouraged to bring their kids as I performed close-up magic in the lobbies of six of their branch offices, making sure to also hit all of the talking points for the promotion while performing.
Sandy and I started back at Quassy Amusement Park for our seventh season at the end of April and continued there through July 4th. Shortly after the holiday, we left for the beautiful shores 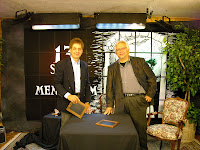 of Lake Tahoe, California, where I worked with mentalist Richard Osterlind, my friend and business partner, on a set of instructional DVDs on the subject of mentalism. Pictured at right are Richard and I on the set during the shoot.
We returned to Quassy on Labor Day and will finish out the season with eight shows this coming weekend. Just last week, I lectured for a magician's group in Ashland, MA on the subject of restaurant magic and we are also busily preparing for our shows at the Harwinton Fair (this will make it 18 years that I've been performing at this delightful country fair in northwestern Connecticut.) I also just signed on to do a series of Halloween-themed shows at the Beardsley Zoo for their Howl A Ween event. Watch their website for dates and times. I'm also still performing close-up magic at Ginza in Bloomfield every Sunday night from 6 to 8 PM so if you like great Japanese food seasoned with a little magic, stop by! (And, I should also mention that Sandy's there on Friday nights making outrageous balloon sculptures.)
Whew! I guess that's it for now. More sooner than later...I promise!
Posted by Jim Sisti at 5:02 PM