The Dog Days of November

November is usually a very quiet month as people tend to hoard their entertainment dollars for the holiday parties in December but this year was an exception. I criss-crossed four states this month doing shows for corporate groups, colleges, night clubs, health care organizations and a charity fund-raiser or two.

The month began with some walk-around magic for a very noble cause, the CUREChief Foundation. Anyone who has been touched by cancer or knows someone who has (and that would be just about everyone) should really check out their site. It's hard to explain what they do but I believe you'll be touched by what you read.

I also got the chance to work with Jay Rodrigues again this month. I opened a show for him at a country club and we both received standing ovations from a truly great (and apparently very discerning) audience. Though I've seen his act a bunch of times (as he's had to sit through mine, also), he still makes me laugh out loud. Check out this video clip (but be warned that this is not safe for work or for those with delicate sensibilities!):

Also in November, Sandy and I had the chance to see John Fogerty. He was appearing at the Mohegan Sun Casino Arena and the show was amazing - particularly from third row seats! A tireless performer (in his 60's, no less!), he was on tour promoting his new CD, Revival. He performed most of the new album in addition to busting out most of his CCR repertoire. Great music that brought back dozens of wonderful memories. It also didn't hurt that I managed to walk away from the Blackjack tables with a hundred bucks more than I started with. All in all, not a bad night. 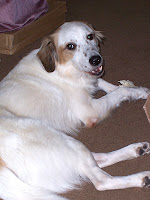 I probably should explain the screwy title for this post. The month ended with us adding a new member to the family. Ollie is a four-year old Brittany Spaniel that we adopted from a rescue agency in Tennessee and so far he's been a perfect gentleman. He's not too sure about me yet but has bonded with Sandy to the extent that she can't go anywhere in the house without Ollie being right behind her. We had been thinking about getting a dog for quite a while but quickly decided against going the pet store/puppy route. Plus, there are so many great dogs like Ollie out there just waiting to be adopted. He's only been with us for a few days now but I'm quite sure we made the right choice. Ollie's a keeper!

Two more days and I'll begin my descent into Christmas Party madness. If I survive, we'll talk again next month.
Posted by Jim Sisti at 10:53 PM