It's been a short but eventful summer.

In early July, Sandy and I wrapped up the first leg of our run at Quassy Amusement Park with a familiar face in the crowd during one of the last shows. Not being able to place this person right off, I chatted briefly with him after the show and soon discovered that it was actor Anthony Edwards of Top Gun and ER fame. You just never know who you're going to run into! 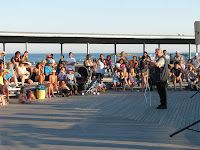 In July, Sandy and I took the big show to Ocean Beach Park in New London where we participated in their "Magic on the Boardwalk" series. We've been part of this ongoing event for the last six years now - there are magic performances every Wednesday throughout the summer - and on a pleasant summer evening, such as this one was, there's no better place to do a show. Plus, the crowds who attend are great. They're there to see magic and they're always enthusiastic and gracious. 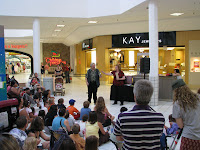 Later on in the month, I was scheduled to do an in-store promotion at an educational toy store in a shopping mall but the show was moved out of the store to the common area of the mall, creating one of the more unusual performing environments I've ever worked in. It was a good crowd, though, and Sandy and I had fun with the admittedly strange situation.

Also in July, I had the opportunity to work for Merrill Lynch, performing strolling magic for two huge employee functions in the Waldorf-Astoria ballroom in New York. It was a wonderful time and great fun to meet people from all over the country who were invited to these elaborate affairs.

In August, we were invited to perform once again at the Wolcott Country Fair where Sandy and I did two family shows under a big tent before returning to Quassy the following week to finish up this year's run (we'll still be there weekends through the end of September). 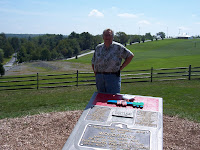 There wasn't much down-time to speak of this summer, though Sandy and I did get a chance to see Journey, Heart and Cheap Trick on one bill as they came through Connecticut. Also, we took a day trip to see the new museum that was built close by the site of the original 1969 Woodstock festival in upstate New York. Unfortunately, a power outage in the town of Bethel closed the museum for the day but we did stop by the festival site which has been preserved and marked with a sculpture. Unfortunately, the plaque on the sculpture had John Sebastian's name spelled incorrectly but the place still had an amazing vibe. You could almost still hear Jimi Hendrix's Star-Spangled Banner echoing off the surrounding hillsides. We're hoping to get back there and maybe even see the museum this time!

Holiday shows are starting to trickle in and once Labor Day is over, December will be filling up fast. We're also looking forward to our annual performances at the Harwinton Fair on October 4th and 5th this year.
Posted by Jim Sisti at 12:20 PM