March certainly began normally enough. Corporate clients this month included Pfizer and Northeast Utilities. I also had the chance to do a fund-raising show for a local high school which turned out to be a lot of fun.

Later in the month, however, during a performance for a regional convention of the Future Business Leaders of America, I lost my balance on stage (the back wall immediately behind the stage that I went to lean on to pick something up wasn't a wall at all but a projection screen) and took a bit of a tumble. I managed to return to my normally vertical orientation and finished the show, thinking at the time that my only injury was a bruised ego. As it turned out, however, two days later every muscle in my lower back decided to play freeze tag, which totally incapacitated me for the better part of four days. Needless to say, not fun at all. 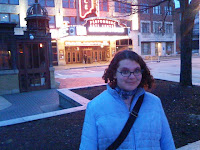 I managed to block off an evening to take my daughter, Rebecca, to see Bernadette Peters in concert with the Rhode Island Philharmonic Orchestra. Rebecca has very eclectic musical tastes for a 21-year old and while Broadway show tunes are not my favorite form, the concert was very enjoyable and it was good to have some Dad-daughter time. (She's pictured here just before showtime in front of the beautiful Providence Performing Arts Center.) Rebecca is a big fan of Ms. Peters and it was fun just to see her face when the star of the show took the stage. I believe she had a similar look when I took her to see the Backstreet Boys some years ago but, as the mind tends to erase horrible memories of the kind that only ten thousand screaming teens and tweens can create, I can't be totally sure. 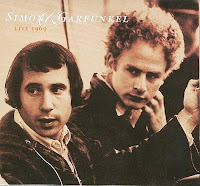 A big highlight this month for me was the release of a long-forgotten recording of Simon & Garfunkel on their 1969 tour. This tour was significant for a couple of reasons. First, it was the only time they had ever taken a full band on the road with them and second, it was their last tour before they would split up the following year.

This tour was undertaken after they recorded the Bridge Over Troubled Water album. However, its release was still months away so no one in the audience was familiar with the new material, including the title song. In fact, Art Garfunkel introduces the song as a new one as the now-familiar piano chords begin. Now, I've seen Simon & Garfunkel together and separately a number of times and every time the intro to Bridge begins, the audience goes wild. However, on this recording, the song is met with silence; nobody had ever heard it. Art Garfunkel then proceeds to deliver a rendition that rivals the studio version and when he brings the song to its conclusion, it's total pandemonium. The audience's approbation literally roars out of the speakers and you realize that the audience at that time and place knew they had just witnessed the birth of a timeless song. It's an amazing moment and we're fortunate that someone dug this tape out of the vault and made it available.

The new CD is called simply Live 1969 and is only available at Starbucks right now (which makes me want to go into a music store and order a latte...) but it'll be in regular stores (i.e. ones that don't serve coffee) sometime in the fall.