It's been almost three months since I've had the chance to add an update so while I have a few moments, I thought I'd fill you in on what's been going on since the last time we spoke.

The most exciting thing is that I've signed on to perform close-up magic every Sunday night at Ginza, a beautiful restaurant in Bloomfield specializing in Japanese cuisine. They have a number of Hibachi stations and wonderful sushi selections - and now there's magic every Sunday evening from 5:30 PM to 7:30 PM. Ginza is truly a destination restaurant worth the trip from just about anywhere and I've been having a great time there. Make sure to stop by and say hello. In September, Sandy and I wrapped up our season at Quassy Amusement Park and started off October with two days at the Harwinton Fair. We've been there for 15 years now and always have a lot of fun. Later on in the month, I performed on two comedy club bills and did some walk-around magic at the Waterbury branch of the University of Connecticut. Speaking of schools, I was also the guest speaker for two psychology classes at Masuk High School in Monroe. We discussed the science of deception and why magic works. I also had the opportunity to bust out a couple of tricks for the appreciative students. 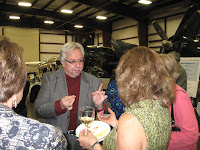 Another show of note, mostly because of the unusual venue, was doing some walk-around magic for the Rockbestos-Surprenant Cable Corporation as part of their awards dinner. The event was held at the New England Air Museum and it was very exciting to be performing while literally surrounded by history. Military planes and helicopters are all beautifully preserved and on display and the affair was held right in the middle of it all. It was quite a memorable event.
Despite the economic downturn, holiday shows are still coming in. The stock market might go up and down but the holidays still arrive despite it all. There are still some open dates, however, so if you're in the market for some entertainment for your holiday get-together, get in touch soon!
Posted by Jim Sisti at 1:59 PM