Fall is rapidly becoming more evident in these parts and as we have annually for the last five years at this time of year, we bid a fond farewell to the amusement park today for another season. I am happy to report that Sandy and I went out on a high note this year with four standing-room-only shows, a marked contrast to last year's final day which was totally rained out. We're looking forward to taking the family show to the Harwinton Fair this coming weekend with two shows each day at 1 and 4 PM. 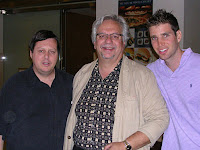 September was busy for me with a number of private shows, including one for Verizon in the heart of Boston's financial district and another at Eastern Connecticut State University. It wasn't all work, however, as Sandy and I got a chance to get into New York City and spend some time with Louis Falanga, the president of L&L Publishing (he publishes my books) and also Joshua Jay, one of the finest young magicians working today (Louis produces Josh's instructional DVDs). We were able to take in an exhibition at the American Museum of Natural History that Sandy's been dying to see and also, thanks to Louis' ticket procurement skills, we were able to get 5th row orchestra seats to see Wicked literally five minutes before curtain. It was truly a great day.

Speaking of difficult tickets, thanks to our good friend, Jim Spinnato, we were able to attend an invitation-only concert at one of the local casinos to see Heart last week. The Wilson sisters were in fine form with Ann featuring a number of songs from Hope & Glory, her excellent new solo album. Speaking of new albums, I'm really looking forward to Bruce Springsteen's new one, releasing on Tuesday. It's going to be great if its first single, "Radio Nowhere," is any indication of the quality of the rest of the tracks.