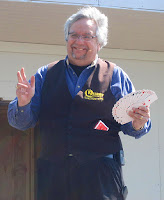 You can determine from the relative inactivity here during much of May that things have been very, very busy. Sandy and I started our season at Quassy Amusement Park and the new material is beginning to break in very nicely. We're still working on a new illusion that isn't quite ready for public consumption just yet, but we're hoping to have it out on the brand new Lakeside Theatre stage before the end of June. 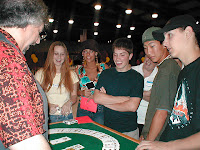 We've also started our high school post-prom and post-graduation party season. Both Sandy and I have a number of high school functions over the next month. I usually do close-up magic for the seniors while Sandy does palm reading. A lot of magicians dislike this market but I have a great time with the kids.

This year, I had the unusual circumstance of performing at my daughter Heather's post-prom party. Unfortunately, her date had an early start at his job the following morning so they didn't make the party (at least that's the story I heard...) As it turns out, they've re-hired me for next year and since Heather's a Junior (her date was a Senior), I still have one more chance at embarassing her at a school function. Speaking of which, where does the time go? It just doesn't seem possible that my youngest daughter is going to proms...
In other events this past month, I had the opportunity to work with Jim Spinnato, one of the busiest (and funniest) hypnotists in the Northeast. Though he's one of my closest friends, we've never really had the chance to perform together. I opened a comedy club show for him last weekend, doing about thirty minutes of my adult magic show. Unfortunately, we had one less-than-model citizen in the audience who was a bit outspoken during my set but really hit his stride during Jim's show. Luckily, the management had the foresight to escort our friend to the door before everything got too far out of hand and Jim was able to bring his show to a successful conclusion.
Weirdness is by no means a rare circumstance in this business, however. For example, just the other day, someone inquiring about close-up magic for his private party actually asked me (cue Twilight Zone music) if it was necessary to interact with his guests. Really! I couldn't make this stuff up! Whenever something like this happens, a line from one of my favorite movies, As Good As It Gets, pops into my head. Jack Nicholson, as the splendidly cantankerous Melvin Udall, in response to a bothersome knock at his door, says, "Sell crazy someplace else. We're all stocked up here."
I'll try to write more soon.
Posted by Jim Sisti at 6:42 PM