Last Friday started off as a much-needed recreational day but it quickly began playing out like something right out of The Out-of-Towners as Sandy and I tried, against numerous obstacles, to get into New York City to see a concert. (Of course, I'm referring to the original 1970 film with Jack Lemmon and Sandy Dennis; the 1999 remake with Steve Martin and Goldie Hawn sucked canal water.) 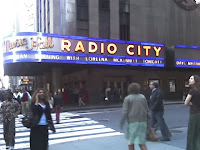 In the film, Lemmon and Dennis play George and Gwen Kellerman, a hapless Midwest couple trying to get to a job interview in Manhattan but one thing after another - plane delays, transit strikes, even a mugging - stands in their way. Likewise, Sandy and I had tickets to see Loreena McKennitt at Radio City Music Hall but prior to settling into our seats, I had some emergency dental work, we were delayed in getting to the train station by an accident and then a three-mile backup and, once we finally got into the city, there were no cabs so we were forced to cancel a dinner engagement with an uptown friend before the concert. 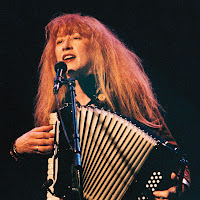 We did finally make it to the show, however, and even with all of the trouble, it was well worth the trip. If you've never heard Loreena McKennitt's music, stop reading this right now and purchase either The Mask and Mirror (my favorite), The Visit, The Book of Secrets, or her newest recording, An Ancient Muse. You can thank me later.

On the business side of things, Sandy and I are looking forward to opening day at Quassy Amusement Park on Saturday. We have a brand-new stage, which we just checked out today, and the park did a great job. Weather permitting, we'll be doing four shows on Saturday and four on Sunday.
Posted by Jim Sisti at 2:55 PM 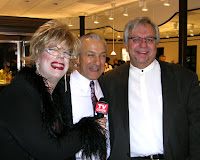 This weekend, within one 24-hour period and across several venues, I performed alongside a chamber music trio, four celebrity impersonators (there was a Robert DeNiro, a Joe Pesci, a Joan Rivers and a Frank Sinatra), an astrologer, a mariachi duo, a clown, a yo-yo expert and a steel-drum band. This is not to mention the guys with the animatronic jungle animals at the high-end fundraiser with the circus theme who were giving rides to the attendees.

There's a camaraderie that exists between entertainers - particularly variety artists - that I've never encountered in any other profession I was involved with prior to performing magic full time. My 12 years in radio, for example, was hallmarked, with one or two exceptions, by backstabbing sycophants who would constantly be jockeying for advantage and position. This was a day at the beach, however, when compared with the time I spent working at an advertising agency. A horrifying number of people would lose their jobs without any warning just because one client decided to "go another way" with their campaign. Definitely not recommended for the faint of heart!

Entertainers, however, have a totally different mindset and even when their talents lie in completely disparate areas, there's usually an immediate rapport that develops. Working with all of these professionals this weekend made me realize how lucky I am to be able to meet and be counted amongst such talented individuals.

That is, except for the clown. It wasn't the clown's fault, though. It's just that they scare me...
Posted by Jim Sisti at 5:46 PM 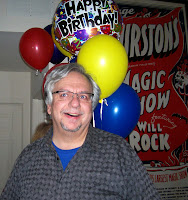 I came home Friday night after working at Señor Pancho's in Prospect to discover that Sandy had put together a surprise party for my 50th birthday (it actually fell on Easter Sunday this year). With just a few exceptions, just about everyone who means something to me showed up, so it was a very special occasion.

I was starting to feel sorry for myself - turning 50 and all - but a gathering like this makes you realize that getting older also means that, if you're as fortunate as I've apparently been, you accumulate a lot of wonderful and amazing friends through the years. The party, combined with my good friend and fellow magic collector, J.P. Jackson, referring to me as a "young pup" earlier in the day, broke me out of my turning-50 funk.

Incidentally, I'll be performing at the grand opening of the new Michael's Jewelers location in Danbury this Friday from 5 PM until 9 PM. If you'd like to stop by and say hello, you can print out an invitation here. Billed as "A Night To Remember," this looks like it's going to be quite an event!
Posted by Jim Sisti at 4:42 PM 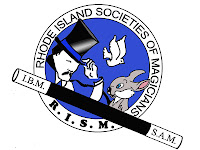 Sandy and I hit the road this past Tuesday to do two lectures for magic clubs in New England. The first one was for the Rhode Island Societies of Magicians (R.I.S.M.) which meets in Cranston. It was a great group and the trip also gave me a chance to catch up with some old friends before and after the lecture.

On Wednesday, we headed up to Boston's north shore to lecture for Assembly 104 of the Society of American Magicians which meets in Salem. We had initially thought about getting up there early and looking around at the witch-related tourist attractions but the unpredictable New England weather had a contrary opinion. It was raining when we left Connecticut but about 45 minutes into Massachusetts, the rain started turning into a wintry mix. Just outside of Boston, the precipitation was unequivocally snow and driving started to get a bit tricky. We stopped and saw our friends Ed and Margie Gardner at Diamond's Magic in Peabody and by the time we left there, there was a couple of inches of the white crap on the ground. Fun times... 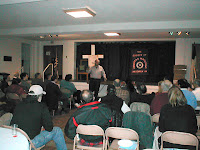 Luckily, it's a hardy stock of people in that neck of the woods and the lecture in Salem was well attended. It was another good, receptive group and I also got a chance to catch up with my friend, Vlad, a magician with a decidedly vampiric edge, whom I haven't seen in a number of years.

Well, it's off to Señor Pancho's in Prospect tonight for some walk-around magic and then my season of shows at the Isabella Freedman Retreat Center begins tomorrow evening.