I know...I know! It's been almost three months since I've posted but things have been busy, busy, busy. In fact, I have just enough time for a brief post (a show tonight and three shows tomorrow!) but I do hope to have more time for blogging as things settle down for the summer. 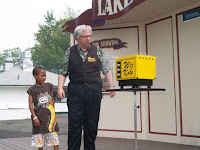 Since we last spoke, our season at Quassy Amusement Park got underway. Sandy and I added several new pieces to the show this year, including one where an unfortunate thing happens to a kid's sneaker while we're trying to clean it with a new gadget. It's very funny as I think you can gather from the picture - particularly from the expression on the face of the loanee as smoke starts to pour out of the contraption. Of course, everything is put right at the end and the volunteer's footwear is restored to good-as-new condition (or at least as good as when we first borrowed it.) 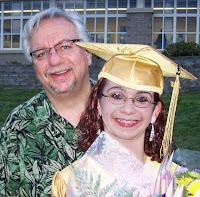 It was also graduation season which means lots of post-prom and post-grad parties. These are always a lot of fun but it also means staying up until all hours of the night. For example, I got home at four in the morning one day last week after doing two high schools in one overnight period. (As of this writing, I have one more to do before I can get back to sleeping during relatively normal hours.) In the middle of all the usual June craziness, my youngest daughter, Heather, graduated from high school after receiving a number of academic awards and scholarships. She'll be on her way to the University of Connecticut in the fall and we're very proud of her.

That's it for now. More developments as they occur...
Posted by Jim Sisti at 3:58 PM