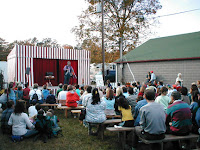 October began with an appearance at the Harwinton Fair. It's one of the last country fairs on the Connecticut agricultural fair calendar every year and it's been a favorite venue of mine for quite a few years now.

I also managed to squeeze in a few corporate shows this month. I did two afternoon shows for the employees at Stanley Tools at their world headquarters in New Britain. I also had the chance to work for Insurity at a very posh event held at the Mohegan Sun casino.

The balance of the month, particularly for the last week or so, featured both stand-up shows and walk-around magic for Halloween parties for both family groups and adults. Almost every one of them was a blast except for one family show at a very upscale country club in Westchester, New York. The adults were under the misconception that the entertainers (there were several other performers there besides me) were there to babysit for the children, freeing them to swap the latest gossip in the back of the room. This created a noise level that made it just about impossible to perform. (At one point, even the children turned around and asked the adults to keep it down!) This isn't the first time I've run across this particular phenomenon and I know, in trading war stories with other entertainers, that it happens fairly often. This level of rudeness always leaves me puzzled but, of course, I was raised indoors.

Sandy and I got another chance to see Loreena McKennitt as she extended her tour through New England. We managed to score second row seats and it was quite a difference experiencing the show that close in a smaller venue than much farther back in the cavernous Radio City Music Hall. Check this out:

I also got the chance to watch the guy in front of me do some research on his iPhone during intermission regarding the various odd instruments in use. It was such a cool gizmo that I ended up picking one up several days later. I know this puts me dangerously at risk of shopping at the Gap or frequenting the local Starbucks but I'm just going to have to chance it.