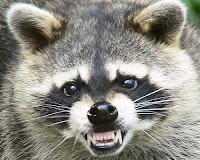 This month began very inauspiciously when a raccoon that was roughly the size of a Sherman tank decided to play Frogger while I was driving home from a late-night show. It ran right out in front of my vehicle and by the time I saw the furry mutant in my headlights, it was way past too late. I felt bad at first but much less so when, the next morning, I discovered over $800.00 worth of damage to whatever plastic material passes for a front end these days. When the insurance adjuster asked me if anyone was hurt in the incident, I was compelled to mention that the raccoon had probably seen better days.

Luckily, the rest of the month was much better as I managed to perform an array of shows in backyards, city parks, and even one or two engagements that were actually indoors. One of the notable shows was one Sandy and I did for the city of White Plains, NY as part of their Sounds of Summer program. We performed at Battle Hill Park, which has the distinction of being the place where the Battle of White Plains was fought during the American Revolution. It was a cozy little park located right in the middle of a quiet neighborhood and the show was attended by area families out to enjoy a balmy summer evening together. It was quite enjoyabe to perform for them.

My youngest daughter, Heather, turned 18 last week and we had a party for her at the Señor Pancho's location in Prospect. Attended by lots of family and friends, it was a good opportunity to just kick back and celebrate another milestone. I also got the chance to spend some time with my older daughter, Rebecca, who's out on her own now and is about to reach a milestone herself as she turns 21 in August.

By contrast, I felt younger as Sandy and I attended a concert, also last week, called Hippiefest. The bill featured a plethora of oldies acts including The Zombies, The Turtles, Mountain, Felix Cavaliere (of The Rascals fame), and others. However, the audience featured more bald spots than a corn field that's been visited by aliens. It was a great show, however, particularly if you remember buying music on black, circular, plastic things.

In August, we're looking forward to performing at the Montville Fair this upcoming weekend and the Wolcott Fair later in the month. In the meantime, I'm keeping a sharp eye out for suicidal wildlife.
Posted by Jim Sisti at 5:12 PM