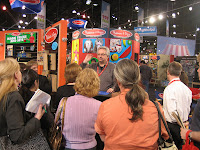 February is usually a quiet month and this one was no exception save for the three tumultuous days I performed at Toy Fair '08, the Toy Industry Association's annual trade show at the cavernous Javits Center in New York City.

I was representing Melissa & Doug, whose quality products grace the shelves of high-end toy stores all over the globe. In recent years, the company has been moving into the magic set market. This year, it's introducing four new sets aimed at kids 8 and older that are more sophisticated and evolved than perhaps any magic sets since the legendary Mysto Magic Sets last seen in the 1930s and '40s.

My job was to demonstrate items from these four new kits to some of the more than 35,000 attendees from all over the globe. Of more than 1500 exhibitors, Melissa & Doug had the largest booth so, needless to say, things were busy, busy, busy for nine hours a day. Buyers who watched the demonstrations ranged from small buyers such as a lovely couple I met who owned a toy shop in a suburb of Dallas to heavy hitters from such companies as Amazon.com, Hewlett-Packard and others.

It was truly a great experience, I was treated exceptionally well, and I hope to be working on some future projects with the company.

Earlier in the month, I did a show for a school in North Haven that was celebrating its 50th birthday. However, due to some kind of miscommunication between the agent who booked the show and the client, they were expecting a clown to show up.

After I arrived and set up the show, the contact at the school asked me if I was going to change. Thinking she was kidding, I asked, "Into what?" Not to be deterred by something as banal as a joke, she said, "You're a clown, right?" Still thinking she was kidding, I replied, "It depends who you ask..." Her continued lack of amusement at my witty banter told me that she wasn't kidding in the least. I told her that there probably had been a mixup of some kind and that I was not, nor have I ever been, a clown. This news bulletin caused the contact to enter a mild freakout state. By the way, this is about ten minutes before showtime and children had alreadly begun to file into the auditorium. Since she had no choice but to let me go on, I decided the best revenge was to do a great show. You can read about the results here and here.