Breezing Through The Windy City

I had a ridiculous schedule for the last full weekend of June which had Sandy and I criss-crossing Connecticut and Massachusetts before winding up my final grad party performance in the wee hours of last Sunday morning. This gave us just enough time to pack for a lecture in Chicago on Monday night.

We flew into O'Hare with only about two hours to spare before the lecture for the Conjuror's Corner Magic Club which meets in the suburb of Roselle. It was a very enthusiastic and warm group and Sandy and I felt very welcome. We went out for a bite with a bunch of the local magicians after the lecture (great food!) and the following day, before flying back, we were treated to a tour of the city courtesy of Ozzie Maldonado, who is a Chicago police officer in addition to being a very serious and focused student of magic. We

had a great time, particularly when Ozzie took us over to meet Tim Felix at Midwest Magic, one of the largest magic shops in the country (that's Ozzie and I at the shop.) It was too short a trip but we certainly made a lot of new friends.

I'm looking forward to some down time in July, starting with a Stevie Nicks concert tomorrow night (I know, I know...I'm old.) She's currently on tour to support her new Crystal Visions compilation and Sandy and I are looking forward to the show.
Posted by Jim Sisti at 5:14 PM 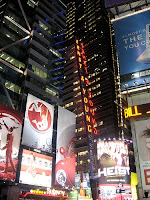 While I have no pretensions of ever working Radio City Music Hall, I can at least now say that I've performed across the street. Last week, I journeyed into the Big Apple to perform for executives from Ernst & Young at a very tony midtown restaurant. It was a great group and we all had quite a bit of fun. Getting in and out of Manhattan can be a trick in itself but the trip was relatively painless once you get used to dodging the tourists who all seem to be looking up at the buildings rather than where they're going. 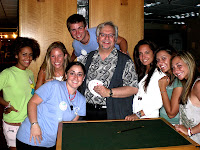 I also performed for Quinnipiac University's freshman orientation on two consecutive Saturday nights these past couple of weeks. This is the third year I've been a part of this event and the kids are always a ball to work for. The university provides entertainment and activities for the incoming class while they're getting the lay of the land. This is presumably to cut down on the number of freshman walking around with a dazed look in their eyes - probably the same look I had the first day I attended Boston University sometime back during the late Triassic Period.

I'm off to do a comedy club show in Massachusetts with Jay Rodrigues in a few hours...and then my schedule starts to get really nuts. June is certainly a hectic month every year but eventually the craziness comes to an end - unlike The Sopranos...
Posted by Jim Sisti at 12:47 PM