Is It Over Yet?

Kill the turkeys, ducks and chickens,
Mix the punch, drag out the Dickens.
Even though the prospect sickens,
Brother, here we go again...

— Tom Lehrer, A Christmas Carol
from An Evening Wasted With Tom Lehrer

I performed twenty-seven shows in the last 30 days and while it was an exhausting schedule, just about all of them were quite enjoyable. The shows certainly ran the gambit, though. I performed for corporate groups in country clubs and hotels, car salespeople in the middle of their showroom and, in one particularly attractive instance, people so drunk by the time I arrived that they could barely find their way back to the apparently oft-visited open bar.

I criss-crossed three states and managed to even get rear-ended by some psychotic woman as we were both stuck in a traffic jam. There was not a lot of damage to my vehicle (though it will still require a brief sojourn at the auto body shop) but, as if to prove the laws of karma do indeed exist, the front of her car was totally demolished. (Note to self: never buy a Mercury anything...) 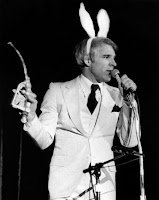 One of the things that made some of the longer trips shorter was listening to the audio CD version of Steve Martin's new book, Born Standing Up: A Comic's Life. Read by the author, it brought me back to the days when Steve first burst upon the scene. I was in college at the time and still remember guys walking around the dormitory halls exclaiming, "Well, excuuuuuuse me!" The book was also revelatory to me personally as Steve started his career as a magician and his experience with magic informed a lot of his later work, including his movies. It's an excellent book, even if you're not a Steve Martin fan, as it's a fascinating glimpse into the creative process. I recommend it very highly.
The shows were actually the fun part of the month. The not-so-fun part is the Christmas craziness that must be dealt with in the short intervals between shows. The shopping, obligatory visits to distant and quasi-relatives, more shopping, the traffic, still more shopping, and just the general mayhem that ensues at this time of year...it can really wear you out! Some years, all of this nutsiness goes smoothly and other years, it doesn't. This year fell squarely in the latter category.

I have one more show to do tonight, then it's home in time to watch the ball drop and ring in 2008.
Happy New Year, by the way.
Posted by Jim Sisti at 6:04 PM