Ringing Out The Old

I know that many, if not most, are happy to see 2008 as just a fading image in the rear-view mirror, but it ended on a relatively positive note for Sandy and I. The number of holiday shows was down slightly this year no doubt due to the economic downturn of recent months (in fact, a couple of companies that had booked holiday parties in the fall cancelled their events entirely due to layoffs, etc.) but I did receive a number of last-minute bookings which turned December into at least a respectable month.

We ended the year by working First Night Danbury - two shows for very appreciative audiences who braved a snowstorm to attend (said snowstorm also doubled for us what normally would have been a 45-minute ride!)

Our two shows bookended two shows by Pete Mamos, a good friend and very funny hypnotist, and then it was off to a private show for two hours of walk-around magic before walking in the door fifteen minutes before midnight to watch the ball drop in Times Square.
Other notable shows during the holiday season were at the new MGM Grand Hotel at Foxwoods and a show in New York City for the Metropolitan Dog Club, hosted by Charlotte Reed, an international pet expert who has had numerous segments on The View. I also performed at the world headquaters of Subway for their holiday celebration this year. All in all, it was an interesting and productive month. 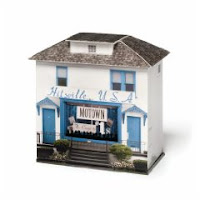 Those who know me know that music has always been a big part of my life so I was particularly happy to find a 10-CD box set celebrating the 50th anniversary of Motown under the tree this year. Entitled Motown: The Complete No. 1's, this set comes packaged in a box that looks like the original Motown studios and includes an amazing 191 tracks featuring the Temptations, the Four Tops, the Supremes, Marvin Gaye, Stevie Wonder and the list goes on and on. I grew up with this music and also spent 12 years playing a lot of these songs in my previous life as a broadcaster. They've all been remastered - these songs have never sounded this good - and it's great to have them all in one place.
Happy 2009 to one and all...
Posted by Jim Sisti at 2:28 PM